K&F Concept is a company that has been around the world of photography since 2011 but admittedly has flown beneath my radar. That was until I was approached about evaluating some of the gear they offer.

I was sent their large professional backpack and I have to say I was unsure what to expect. After all, I had never heard of K&F Concept before and was generally skeptical at the quality of such an affordable gear bag.
K&F Concept Large Professional Camera Backpack

Over the last couple of weeks I’ve put this bag through it’s paces. The bag or, more accurately a backpack, was tested during some outdoor photography outings and during day to day shooting. It looks outstanding and has some great features that real-world photographers will appreciate.
The Basics 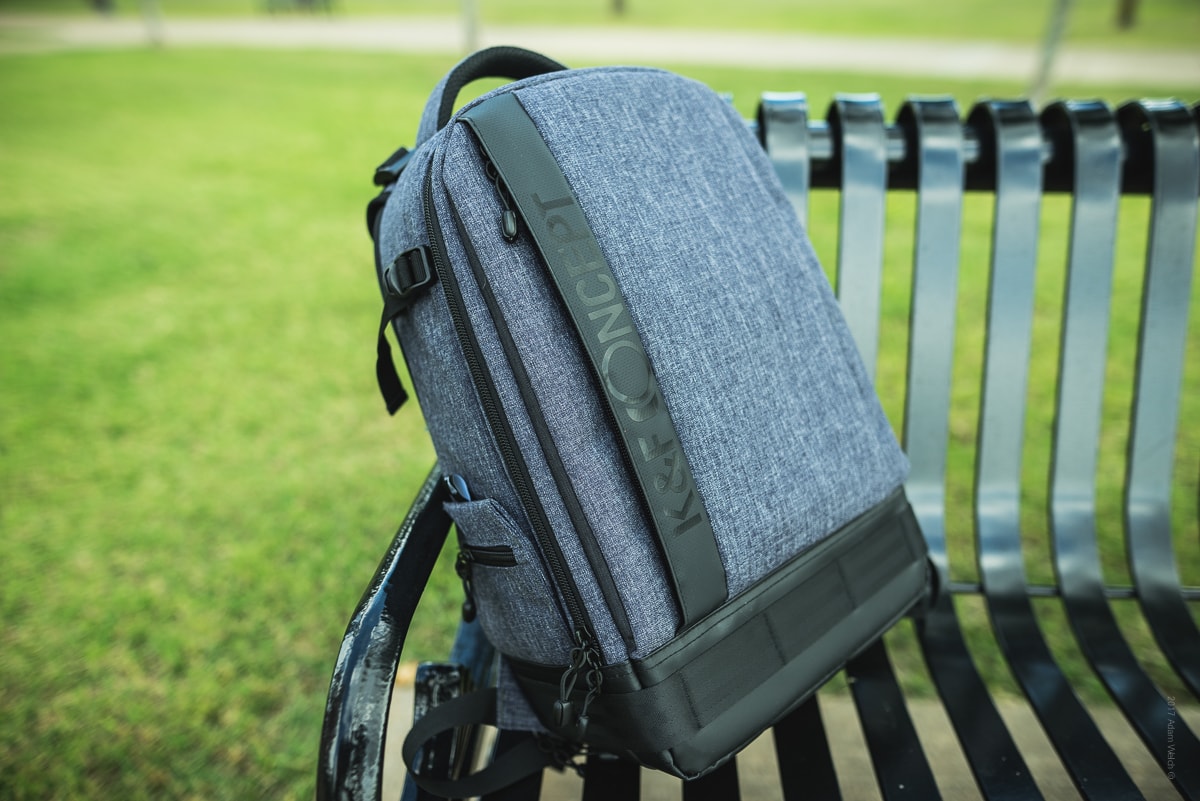 First of all, if you’re the type of shooter who insists that form just as important as function then you will love this pack. The material is a weathered texture and resembles the look and feel of old denim jeans. The color is a blueish-gray with accents being black faux leather.

The entire package is stylish and utilitarian without looking drab or plain by any means. Overall the appearance and feel of the construction is overtly heavy duty yet refined.
K&F Concept Large Professional Camera Backpack

All the zippers and buckles are large and work smoothly. There are also grabbers at the end of each zipper for easy handling even if you’re wearing gloves. There’s not much to say about zippers and buckles on camera bags except whether they work well or they don’t… and these do.

Something I noticed immediately was the bottom of the bag, which is also covered in the faux leather material.

This is a great feature and here’s why. When out shooting and you shove off your bag the first thing to often make contact with the ground is the bottom of the pack or bag. The extra protection provided by this material greatly increases the life and wear of the pack. A great feature for those who intend to really use this bag. However, one thing I would like to have saw included would have been a built-in rainfly for sudden rain showers. The material itself seems as if it would likely shed a moderate amount of moisture but the added security of a rainproof barrier is always welcomed.

At the top of the bag is a padded carry handle that makes unshouldered transport a breeze.

To say this pack is comfortable is an understatement. The straps seem to be extra wide which is great for distributing larger pack weights when you find yourself aspiring to carry enough lenses for a six week Nat Geo assignment or packing every battery in your arsenal “just in case”. The straps are also padded with a relatively breathable mesh to help in heat dispersion.

Regardless of how much you put in the pack the extra real estate of the strap material certainly makes the load easier on the shoulders. Each strap also sports a plastic D-ring for attaching keys or other items you need to keep handy.

Another great feature that is pack from K&F is the inclusion of a sternum strap.

The sternum strap helps to relieve the shoulder load and to stabilize the entire pack when on the move. The strap is vertically adjustable so it works great for both men and women photographers of virtually all sizes.

The back padding of the pack is ample but not overly think. It is corrugated to reduce heat but one thing I did notice after extended wear was the dreaded moist shirt from perspiration build up. This is a problem common to virtually all backpacks but this pack seemed to get hotter fairly quickly. If a sweaty back is a concern then it would be a good idea to regularly unshoulder the pack during all-day shooting trips.
Storage Room

If there’s one thing this backpack from K&F Concept doesn’t skimp on it’s space to stash a ton of gear.

One thing which struck me when i first received the bag was its relative small size compared to some other bags marketed as “large”. It’s more than small enough to fit as a carry-on and doesn’t take up much space in the trunk. Still, it has a no shortage of space to store virtually all manner of photographic gear and gizmos. To access the main camera gear compartment you will unzip the back of the bag.

Inside there are padded partitions which are fully rearrangeable depending on your needs and gear shapes. The two main vertical dividers are rigid and help to add structure to bag when loaded. 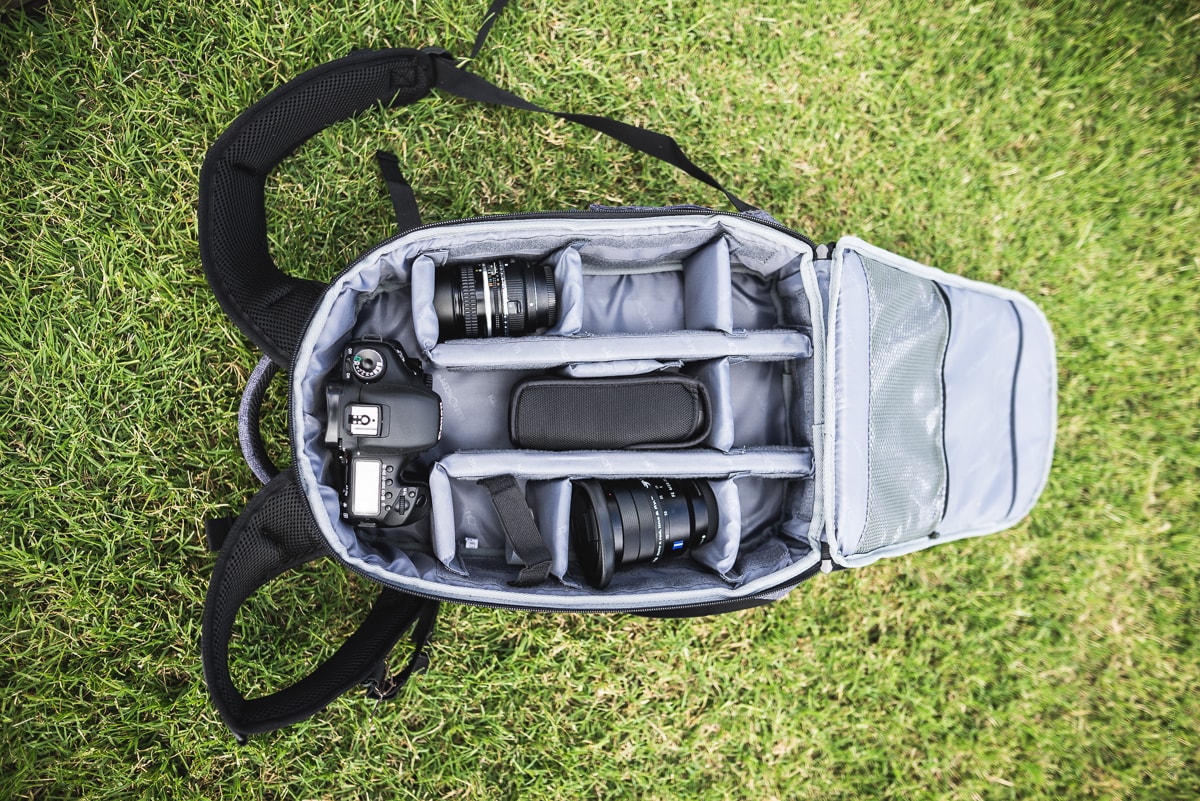 There are also two stash pockets, one zippered and one zippered, on the underside of the compartment flap.

Flipping the pack over to the front (rezip it first) we have an external zippered pocket that works well for storing paperwork and other items.

After unzipping the front flap we are presented with two additional large padded pockets. Both secure with a velcro strap. One being large enough to store up laptops and tablets. There is also an unsecured mesh pocket on the underside of the top flap.

Do you use a tripod a lot during your shooting? If so (and you should) you will find a nifty little addition to the K&F Concept pack; a built in tripod carrier. 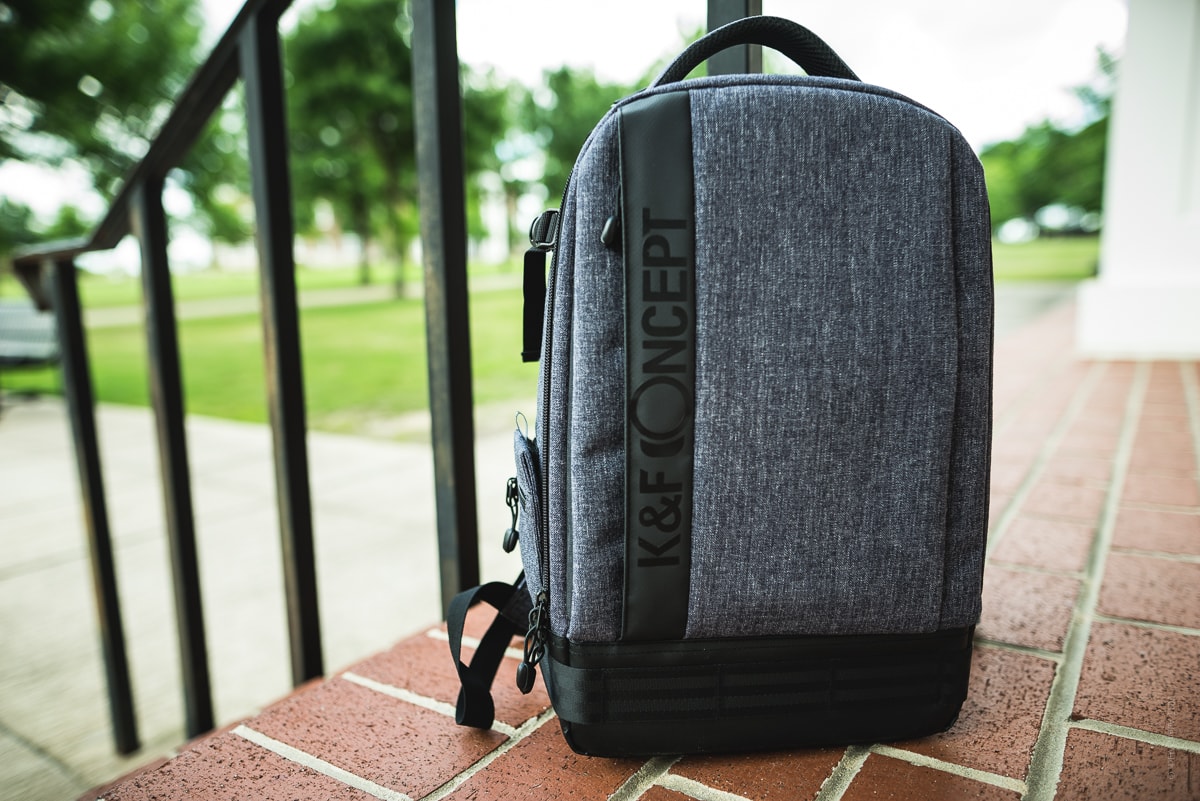 The carrier consists of a top strap located on the side of the pack accompanied with a fold-down tripod holder at the bottom. This makes carrying a wide range of tripods super easy and convenient. It might even take away your excuse for not carrying one….

The carrier is perfect for smaller, travel sized tripods such as my trusty Vanguard 235AB.

I’ll admit the tripod carrier is one of my favorite features on this bag but it would have been nice to have a quick release buckle for the top strap. This is a small detail and the tripod carrier is still an excellent addition to this already outstanding camera backpack.
Some Final Thoughts…

The K&F Concept large professional camera bag is a nice pack for the price with tons of storage space. It works great in a host of different environments and looks to be capable of extended life as a primary gear carrier. Comfortable, stylish, and fits in most anywhere. The size is perfect for carrying a lot of gear and still being stashable. The incorporation of a tripod carrier is awesome. I do wish it had some type of rain cover either built in or included as well as a quick release buckle for the tripod carrier.

Overall, this pack is a solid choice for the photographer who needs a carry a sizeable amount of gear in a manageable package and wants to look great while doing it. I highly recommend the large professions backpack from K&F Concept. It currently retails for around $99.99 USD on Amazon.
About the Author: Adam Welch

Adam Welch Adam is a photomaker, author, educator, self-professed bacon addict, and a hardcore nature junkie. You can usually find him on some distant trail making photographs or at his computer writing about all the elegant madness that is photography. Follow his work over at website , Instagram , and 500px.

Leave your comment
Cancel reply
Note: HTML is not translated!
Blog Category
Search Article
Popular Articles
ND filter VS CPL When and how to use them?
Posing Guide: 54 portrait ideas
What Does the ND Filter Number Mean and How to Purchase One?
Nikon D780 Review - Hands On
What is an ND1000 Filter?