In September 2019, Panasonic introduced its "video-focused" mirrorless full-frame monster - S1H. This 6K camera was mainly designed for videographers.  Panasonic says the Lumix DC-S1H is the "world's first camera capable of video recording at 6K24p." Let’s take a closer at what new features Panasonic S1H has offered!

The Panasonic S1H looks similar to the S1, but it adds many adjustments on the video shooting. The S1H is relatively big and heavy compared with other mirrorless cameras. But as a camera designed mainly for videographers, S1H is way much lighter than those heavy and large filming cameras. The deep grip is a nice design for users to hold easily with one hand. 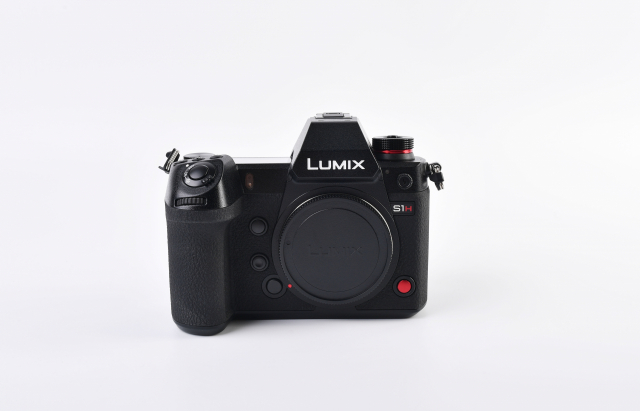 If you ever shot for a longer time with a DSLR/Mirrorless camera, you probably encounter the overheating issues.

The S1H features a built-in cooling fan. You can notice the cooling grid on both sides of the camera. Compared with S1, S1H is thicker because of the built-in fan. The fan will work automatically when you turn on the camera.

Panasonic S1H comes with a 3.2 inch, 2.33 megapixel fully articulated screen. You can turn this robust-feeling screen about 180 degrees or up to 90 degrees.  With this newly design, even the camera is connected to either a USB or HDMI cable, and the screen is still free to adjust the angle without interfering.

On the left side, you will find a 3.5mm jack input, a headphone jack, a USB-C port that can be used to charge the internal battery, and the full-size HDMI port.

There is a nice LCD readout on the right. You can see the parameters clearly even in the bright sunlight day.

The camera features two red Video Rec. Buttons on the top and front.

On the back, there's a mode dial, autofocus switch (continuous, single or auto) and AF selection button for face- and eye-detect, focus mode, etc. You also get a 8 direction joystick and dedicated buttons for the quick menu, playback and more. All of these physical controls make it easier and faster to use this camera. 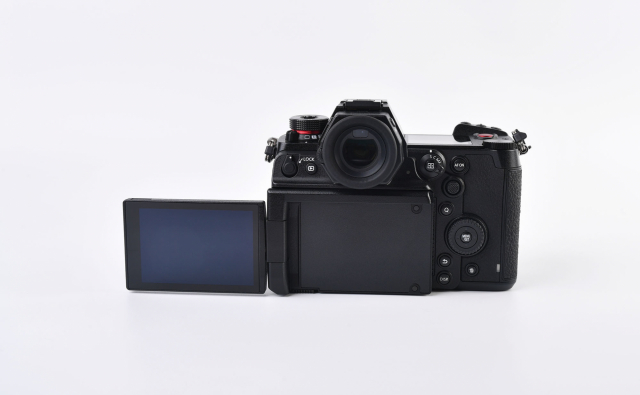 On the right side, there is a memory card slot. The S1H has a dual UHS-II SD card slots to provide stable data storage for high frame rate video. Both slots are compatible with the latest V90 cards, which guarantee 90 MB/s read and write. That's 720Mbps, which far exceeds any of the camera's output bitrates.

At the bottom of the camera is the battery compartment. The S1H uses a newly developed  3050mah capacity battery - the BLJ31.

Panasonic LUMIX S1H is a great camera that can record very high-quality and resolution footage. The video quality, as you'd expect, borders on flawless. At the highest-quality settings with full oversampling, 4K and 6K video is extremely sharp, while skin tones and colors are natural and accurate. The Panasonic LUMIX S1H also features a 5-axis Body I.S. (Image Stabilizer) to stabilize your footage if you are shooting hand-held. You also can customize the screen display to suit your cinematography style, for example with a widescreen crop and opaque surround.

We tested three white balance modes, automatic, incandescent, and custom settings, to see how well the color was restored.

According to the test results, the auto white balance of S1H has a certain degree of yellowness. After using the preset white balance of incandescent lamp, the picture has a tendency of over-correcting, even a little redder. Only after the use of custom mode screen color restore is more accurate. In daily shooting, you can give priority to the use of automatic white balance, when encountered more complex lighting situation then the primary consideration is to use a custom white balance mode.

As a video shooting camera, ISO performance is an important feature to test.

At ISO12800, the noise becomes larger, the details of the image begin to decline.

Under normal circumstances, ISO below 12800 can ensure the quality of the image.

it is safe to say that this looks like the most fully-specced “pro video” mirrorless camera on the market so far.

The Panasonic S1H is the latest full-frame non-invert camera to be released, but unlike the S1, it's more of a video camera. With 6K 25P shooting capabilities and a built-in 10 bit 4:2:2 professional output, the camera is also equipped with a rich color curve mode and dual native ISO, giving it a clear lead over other camera bodies in video performance. The S1H is aimed at professional video photographers, with a full-frame sensor so that users can easily experience excellent picture quality and shallow depth of field, while l bayonet rich Lens Group and accessories, can also play the photographer's creativity. The S1H is a very competitive professional video camera, but also take into account the static photo shooting function, compared to a lot of single video machine, S1h more comprehensive.